Modern industrial cloning techniques have made the construction of very large stretches of DNA much easier. In addition, the simple "single pot" nature of the reactions for assembling multiple fragments has allowed researchers to build many combinatorial variants in a straightforward way. A recent Cold Spring Harbor book has some good background information if you want to dig into the details.

By way of introduction to the method that broke open the field, let's do a simple combinatorial design using the Gibson method which relies on flanking homology to enable scarless DNA assembly.

Let's start by creating a design using a pre-loaded example. In the DESIGN module, go to the Designs menu and choose Designs. 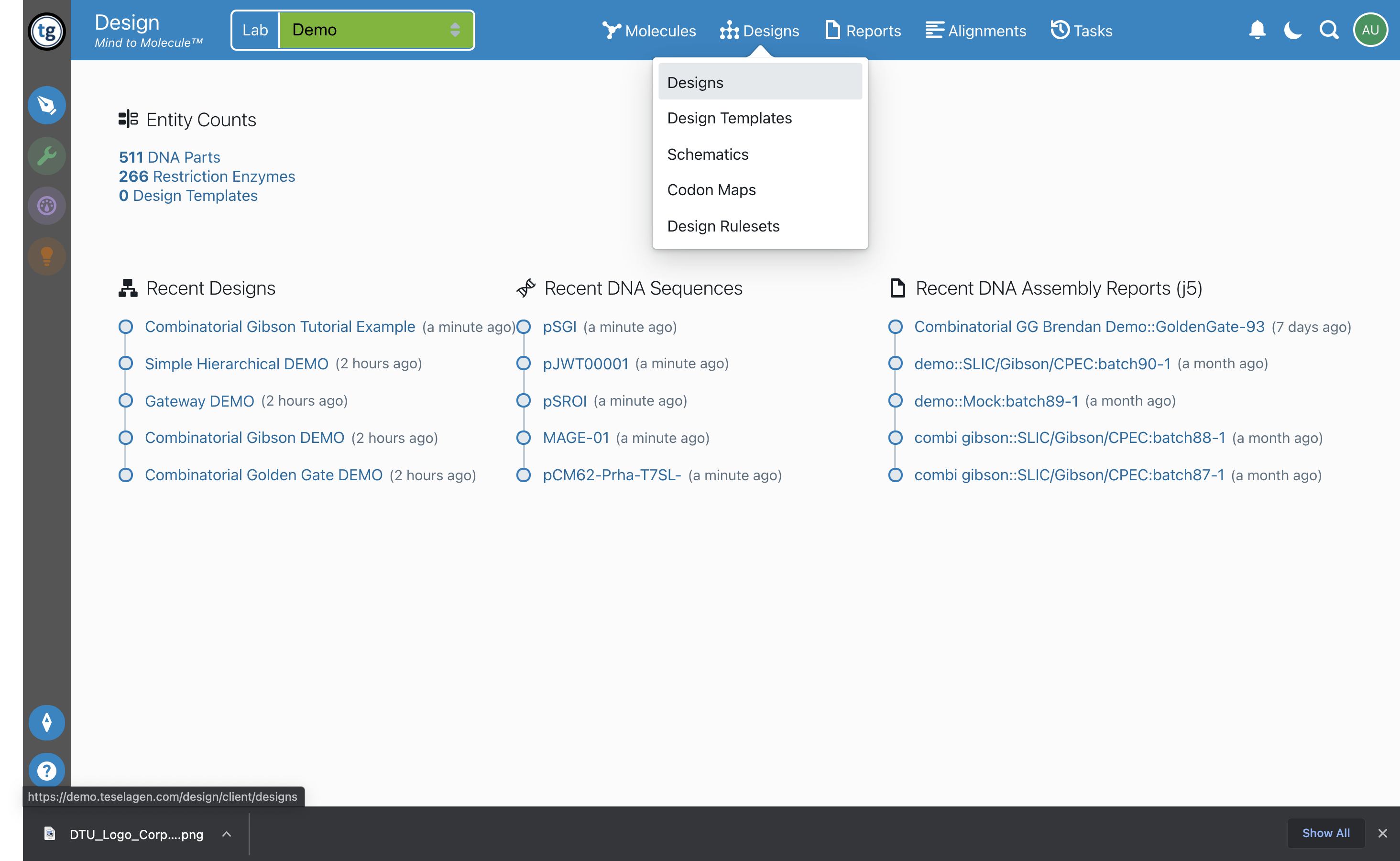 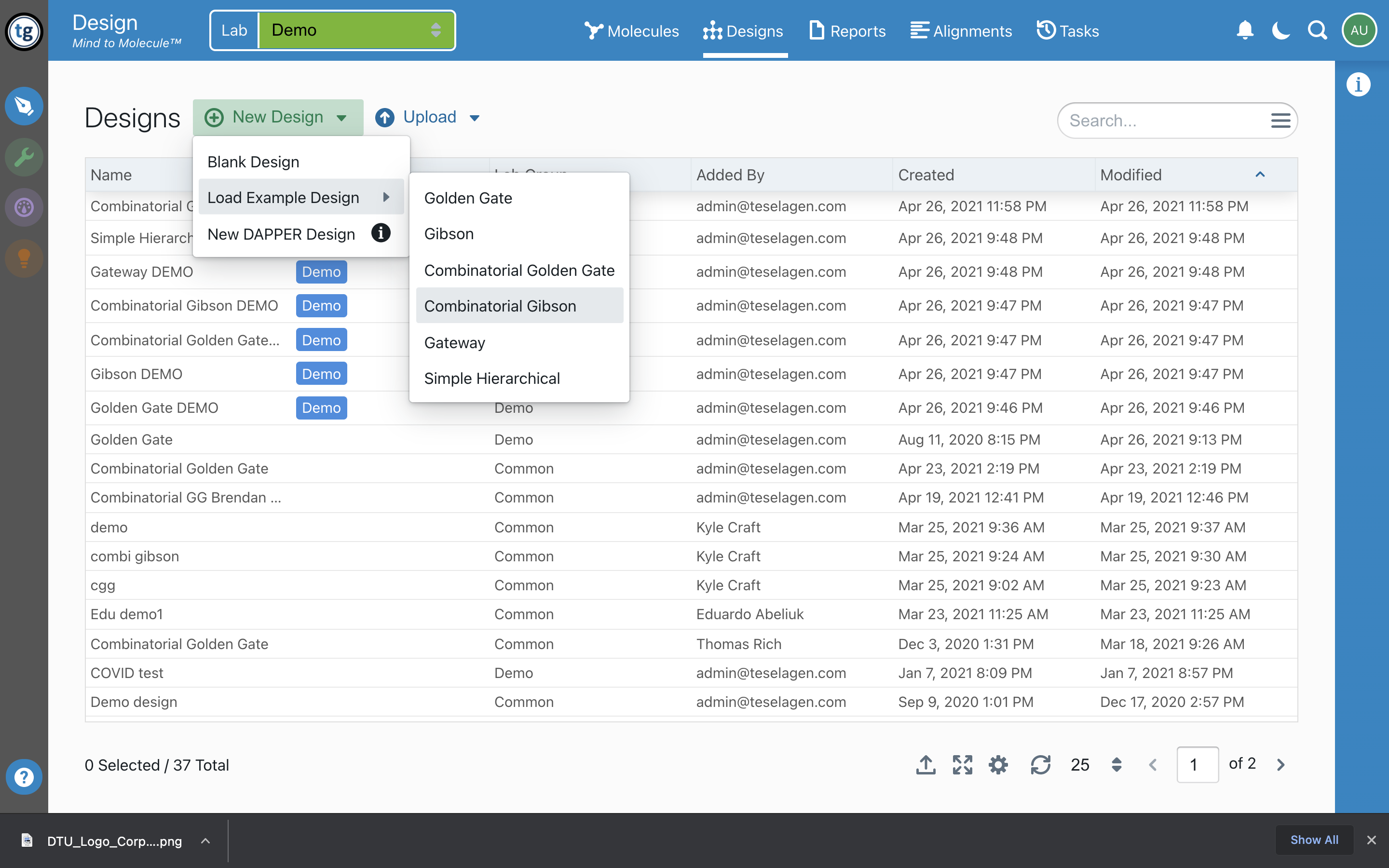 You will be asked to name the design. Note a little yellow dot in the upper left corner of this Name field. That is a route into a very cool name templating tool that you can learn more about here. For now, let us just type in a name and continue...

The demo example will populate the Design Editor with a simple combinatorial design consisting of a single vector backbone coupled to four possible inserts, in this case, a set of 4 antibiotic resistance genes. 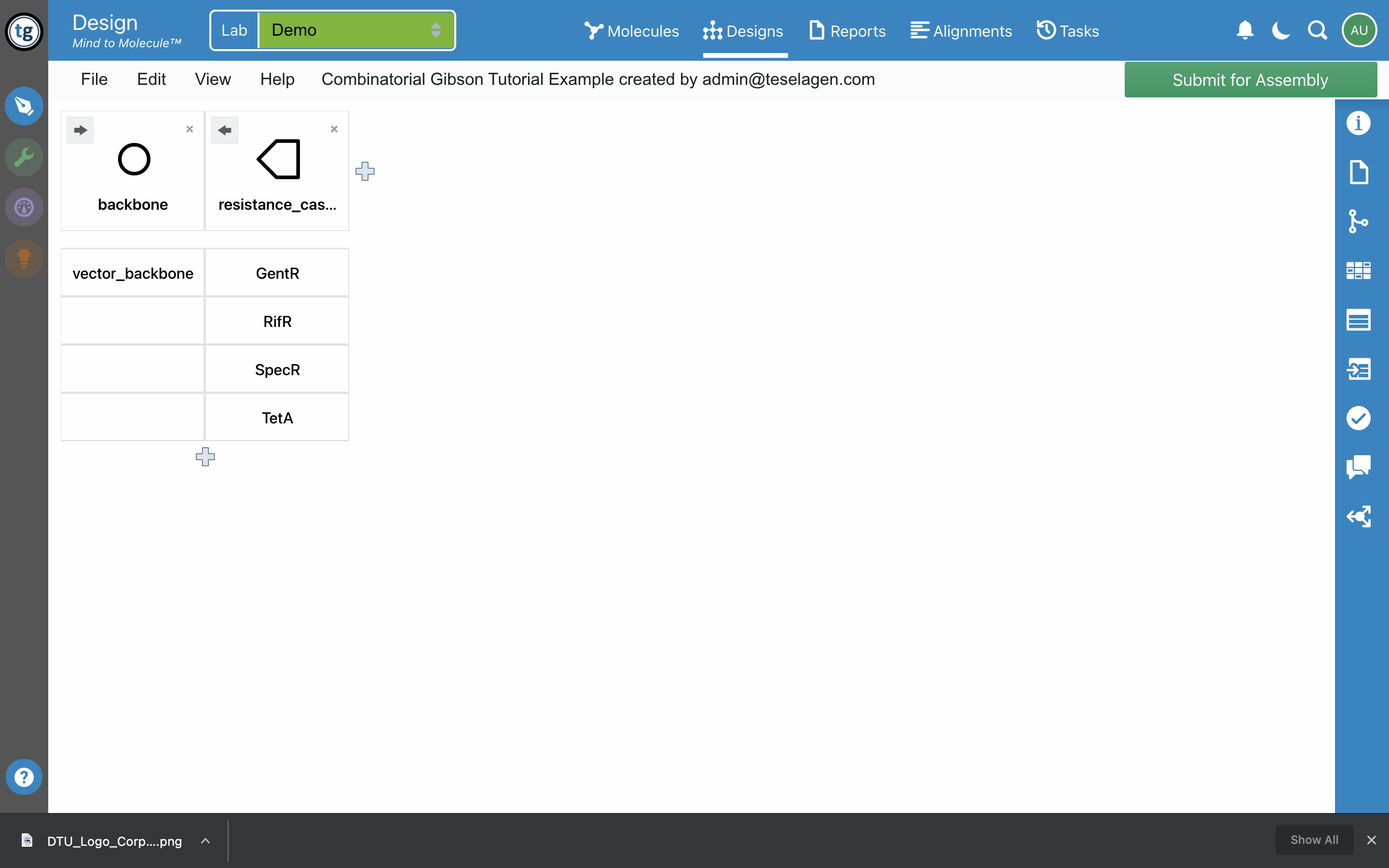 In the next tutorial we will see how to build out bigger designs, but for now, let's just double click on one of the resistance markers to see the underlying context... that is the current location of the gene in its host plasmid. Double click on "GentR" to drop into the sequence editor. 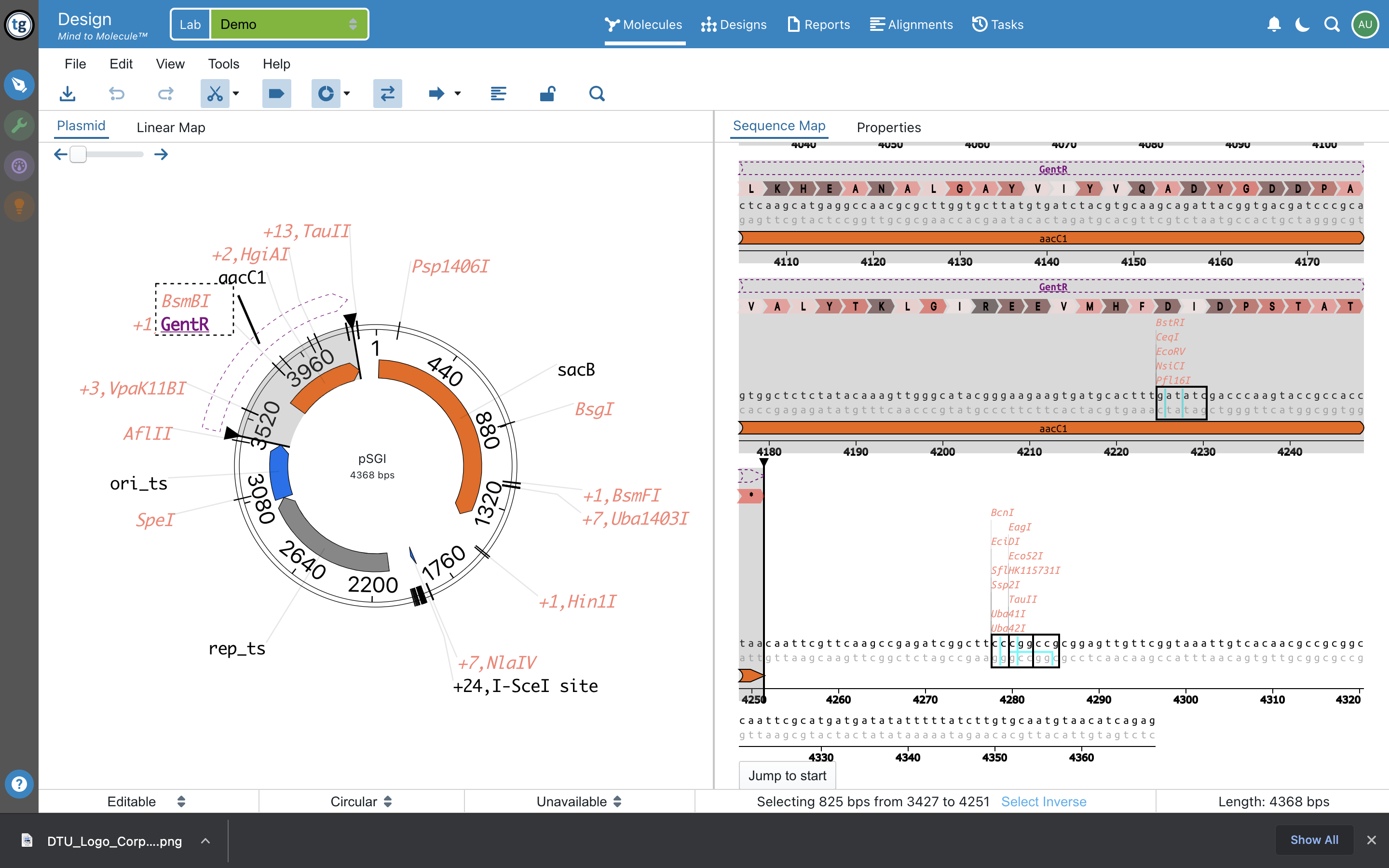 The purple annotation marks the GentR "part" that will be PCR'ed out of this pSGI plasmid and cloned into our new vector backbone. Note that we have introduced a new concept here, that is the notion of a DNA "part". Within our design paradigm, a part is simply a stretch of DNA that carries the designation "part" and is allowed to be put up in the Design Editor when building a new design. The reason for creating this special annotation is very pragmatic in that it tells our assembly algorithm exactly what DNA you as the designer would like to see in the final output construct. Parts are created in several ways... from within the design editor one-by-one, en masse upon upload of DNA (Genbank or FASTA) files, or with easy-to-use tools that can use standard feature annotations to create part annotations. Parts even go into their own special library where they can be searched and tagged.

In our example, however, the parts have already been created for us... no need to do it again, but we can go to the parts library and see that yes... there they are. 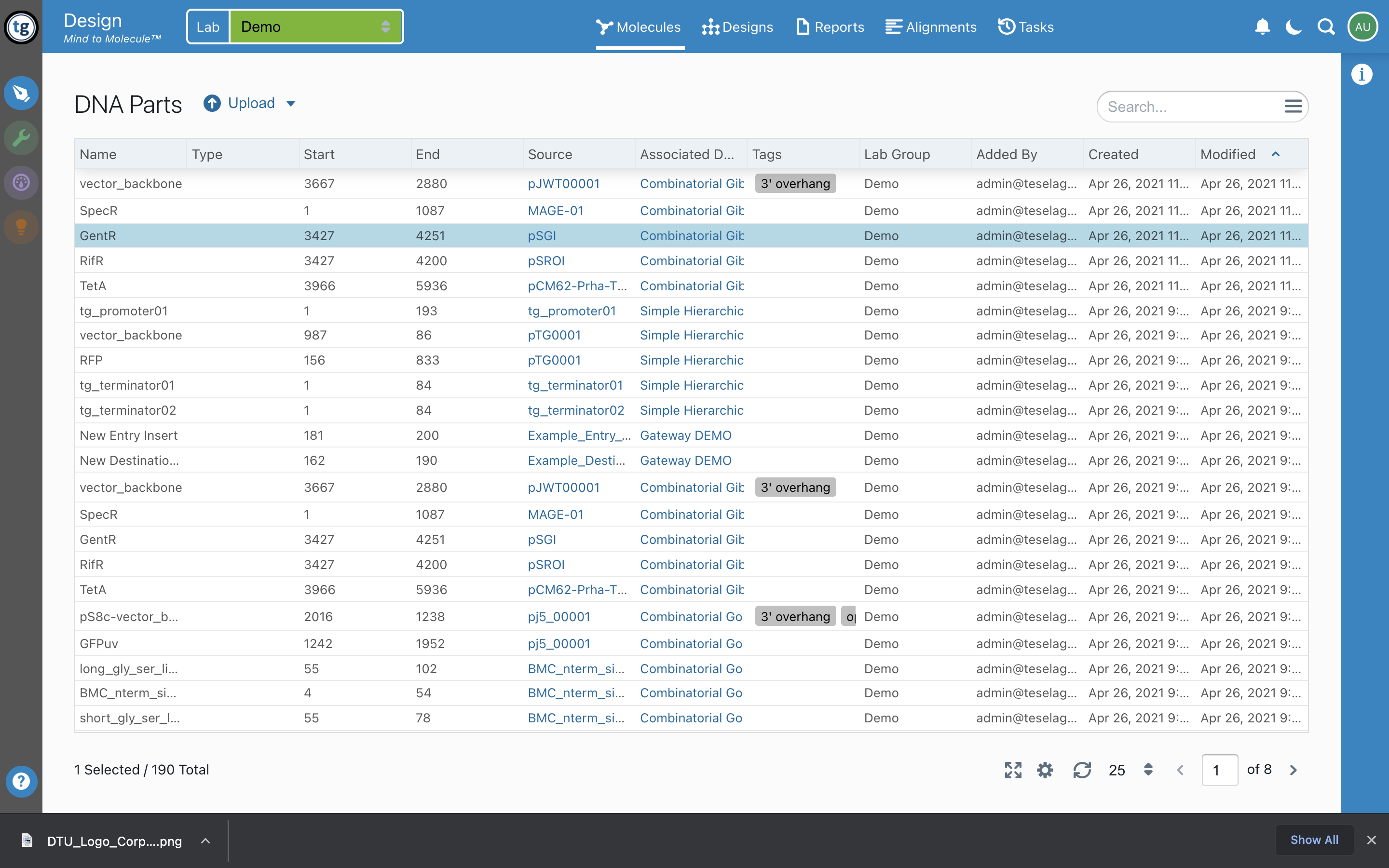 Let us pop back into our simple Gibson Combinatorial design now and see if we can run it through the assembly algorithm (j5). You can navigate back via Designs > Designs (yes a bit redundant on the menu names)...

Pick the Combinatorial Gibson Example you already created from the library of designs...

Notice that the green action button at the upper right is tempting us to submit the design for assembly. Indeed, because the button is not grayed out it shows that this design is complete and can be sent to the assembler. The design editor itself does a lot of checking to make sure your design will successfully submit. Before we push that button though let's check out a few more things in the Design editor. The File/Edit/View/Help menus are fairly self explainatory and control various aspects of the design editor views as well as the usual file functions. The icons at right are less obvious in terms of what they do... so let's go through them starting with the "i" info icon at the top right. Clicking that icon brings up general information about the design as a whole, giving you the option to change the name, add a description, modify the design layout, choose whether to exploit oligo reuse, and other options. 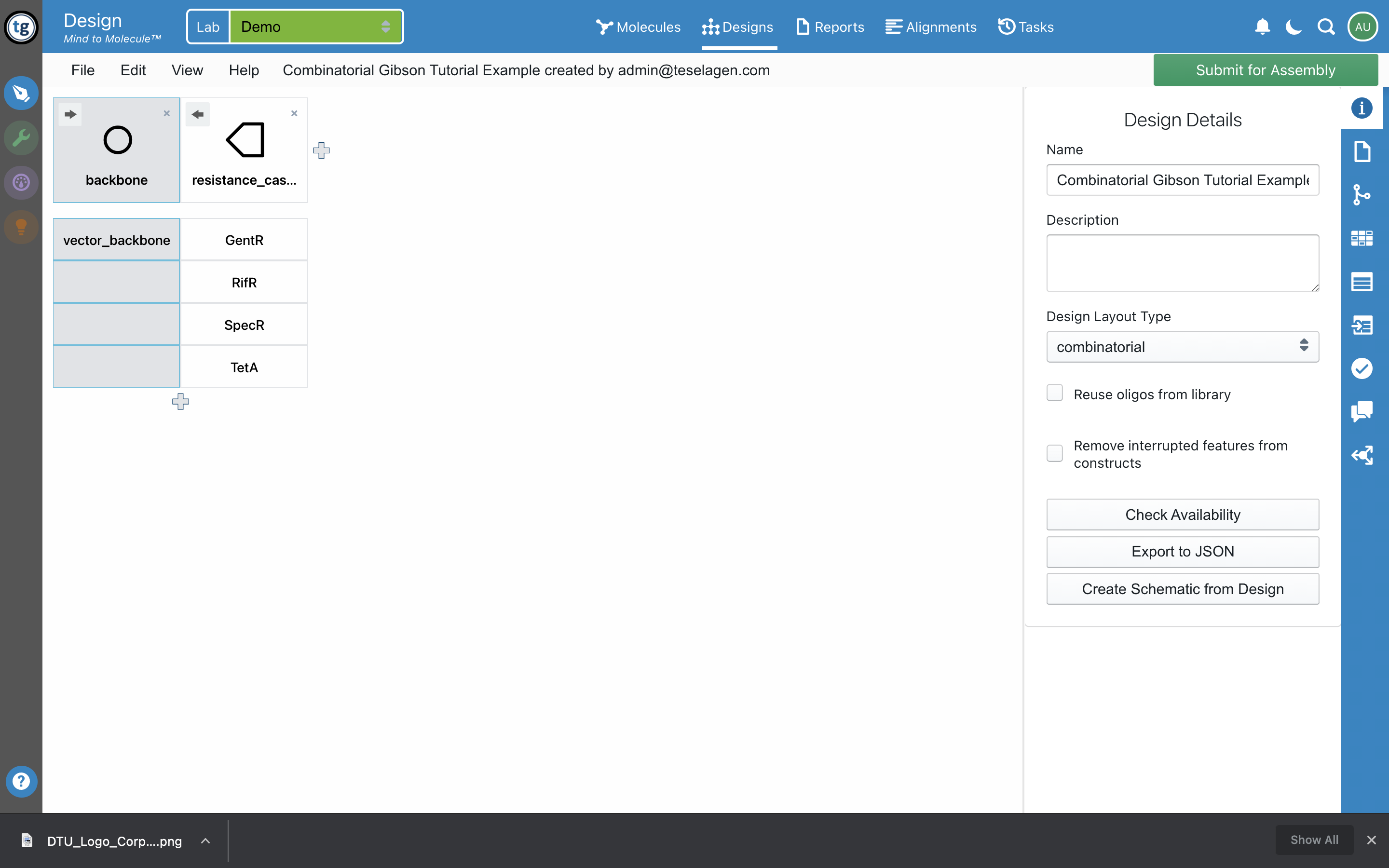 The next menu item is where "Assembly Reports" derived from running this design through the design algorithm are listed. This is a fresh design that has never been run... hence no design reports. 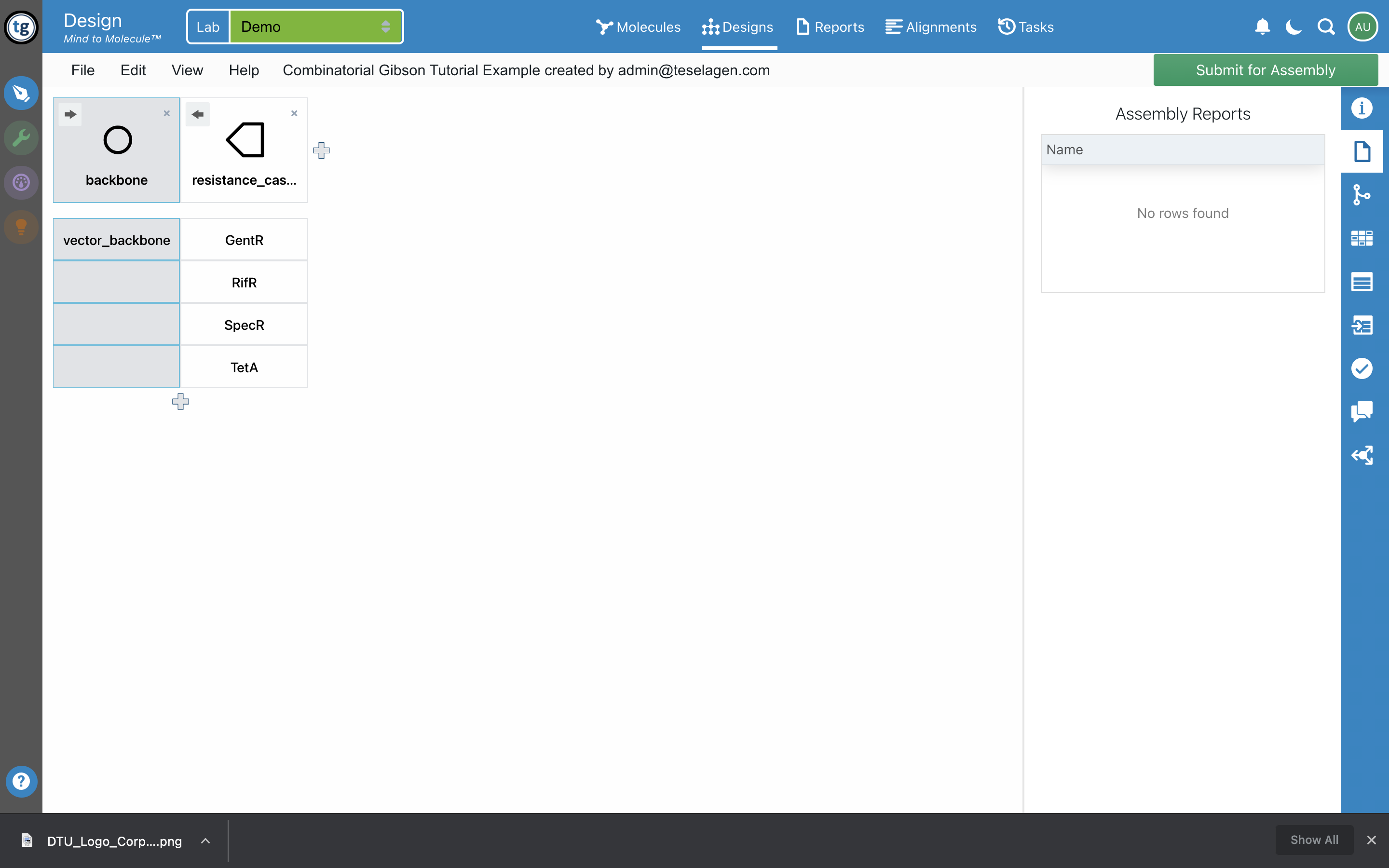 Next, we have "Assembly Reaction Details", specifying what type of assembly method we are using for this assembly, as well as the assembly parameters. In this case, we see that the example is already loaded up with the correct "Assembly Method"... Gibson/SLIC/CPEC. Note that these are the common names for a set of assembly protocols that more accurately might be described as "flanking homology" methods of which Gibson is probably the best known. We also see a way to set up naming templates so all of the constructs come out with names that make sense for your process. 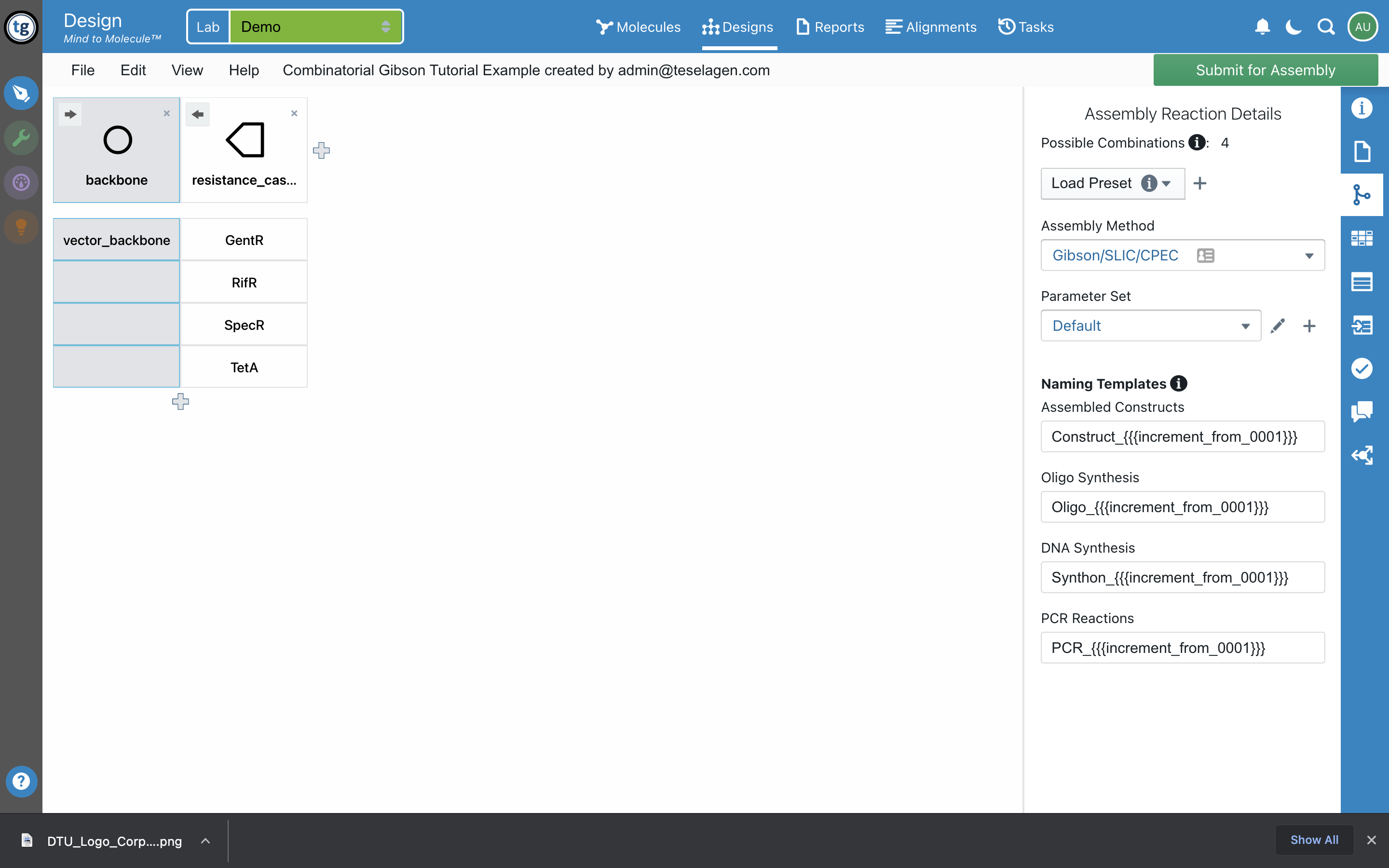 The next item is "Card Details" which applies more to hierarchical designs. Since this is a one-level combinatorial design, we can ignore this for now.

Moving on to the next item, "Bin Details" we see information that pertains to the entire highlighted column. This could have more appropriately been called "Column Details" but the language of probability and statistics has leaked into the platform (apologies!) 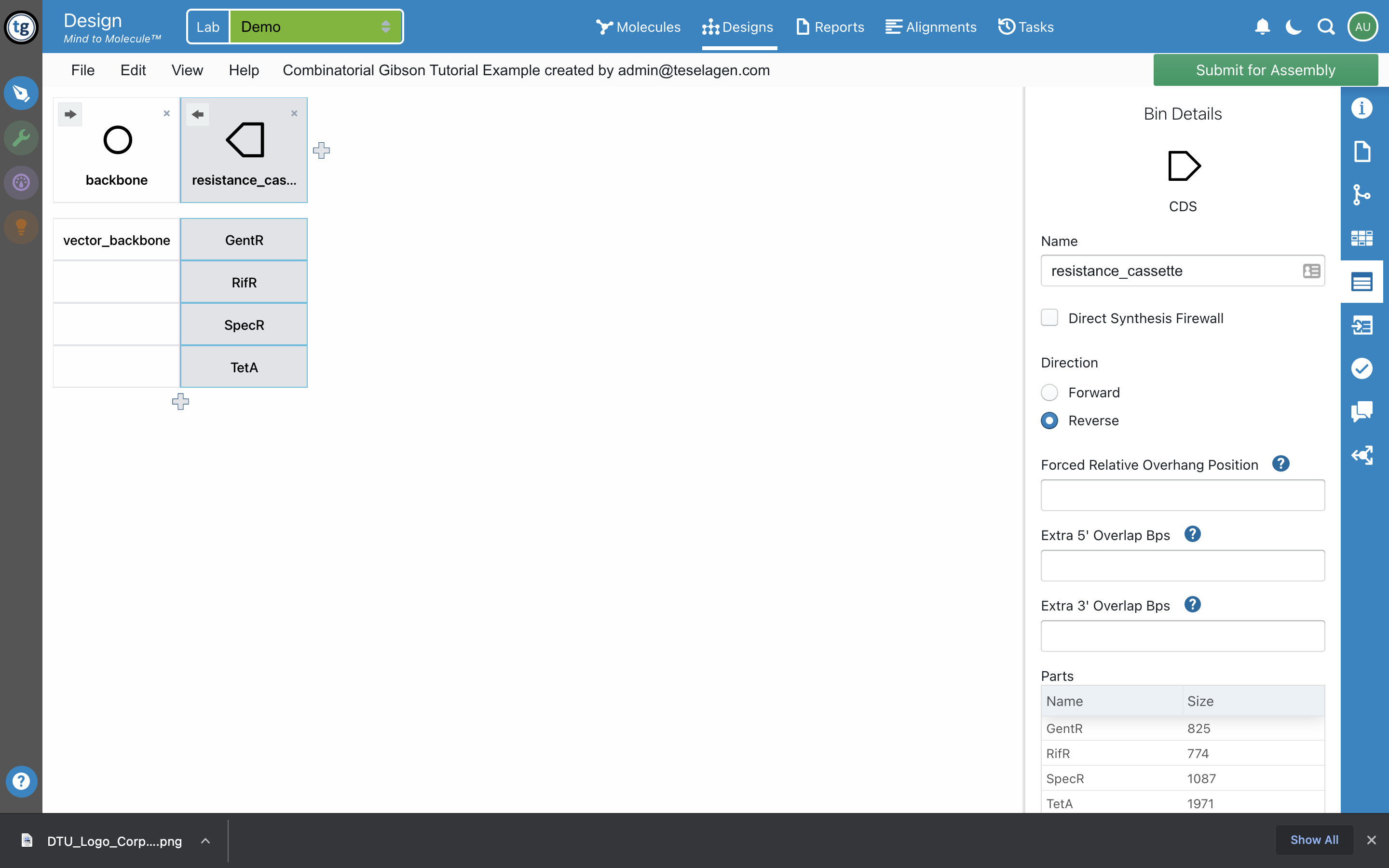 You can learn more about each of these optional parameters by hovering your mouse over the question (?) mark icons. 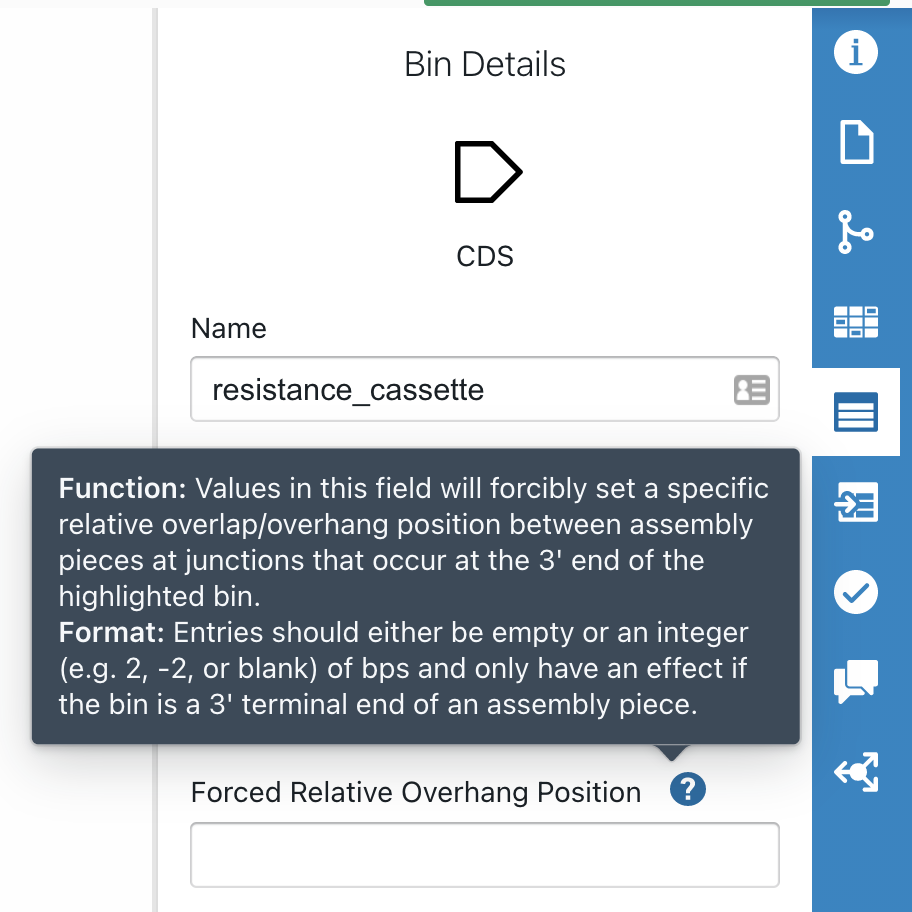 Next up we have "Part Details" which gives you a nice metadata summary of each part in the design. In this case we have highlighted the RifR part. 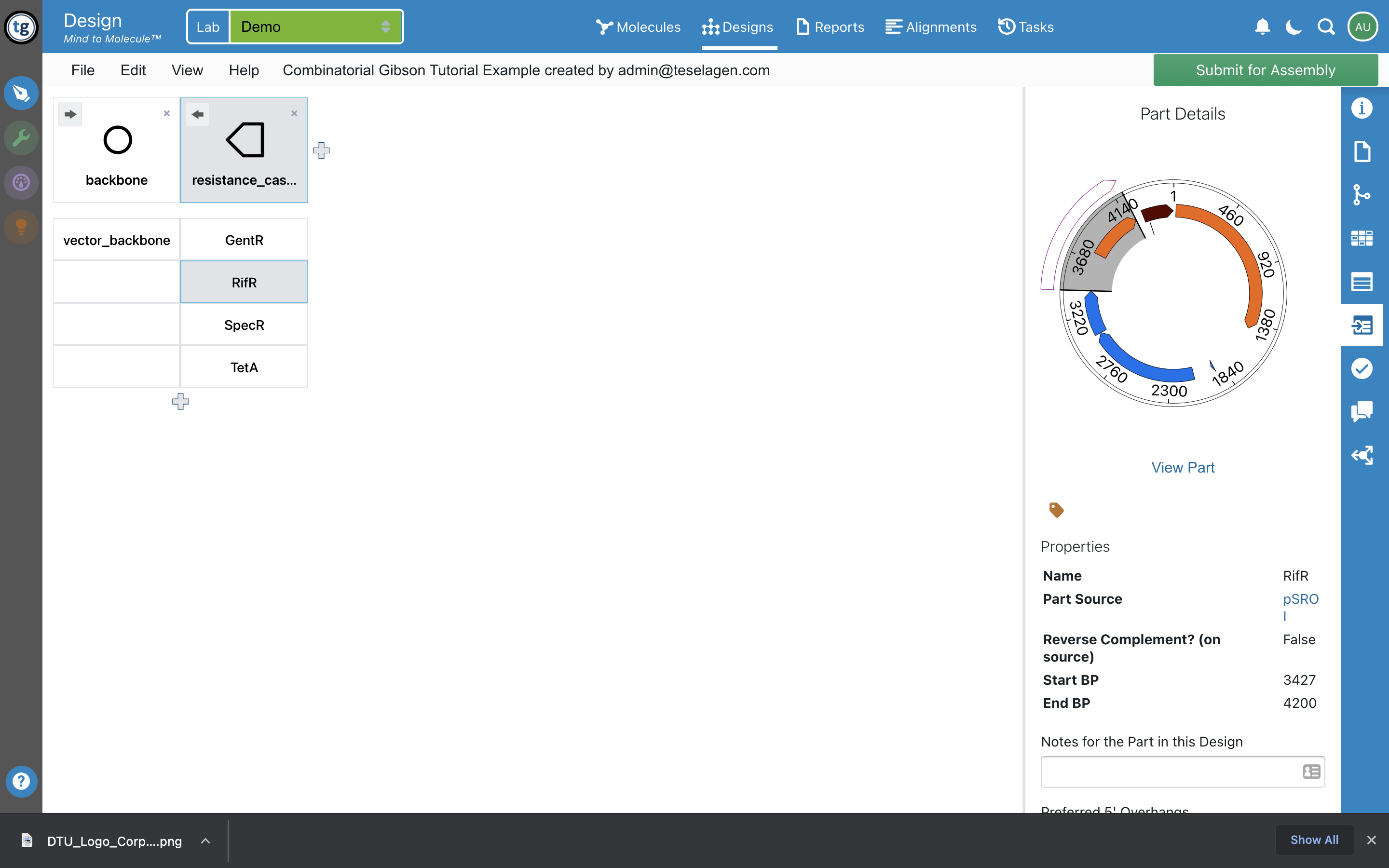 The next menu item is for checking and validating junctions for certain assembly methods. It is not relevant for "flanking homology" style cloning so we can ignore it for now.

The next icon "Comments" allows you to add comments to the design.

The last icon is a portal to the (optional) approvals process. Many labs try to control costs associated with building big libraries by having a simple design review process. 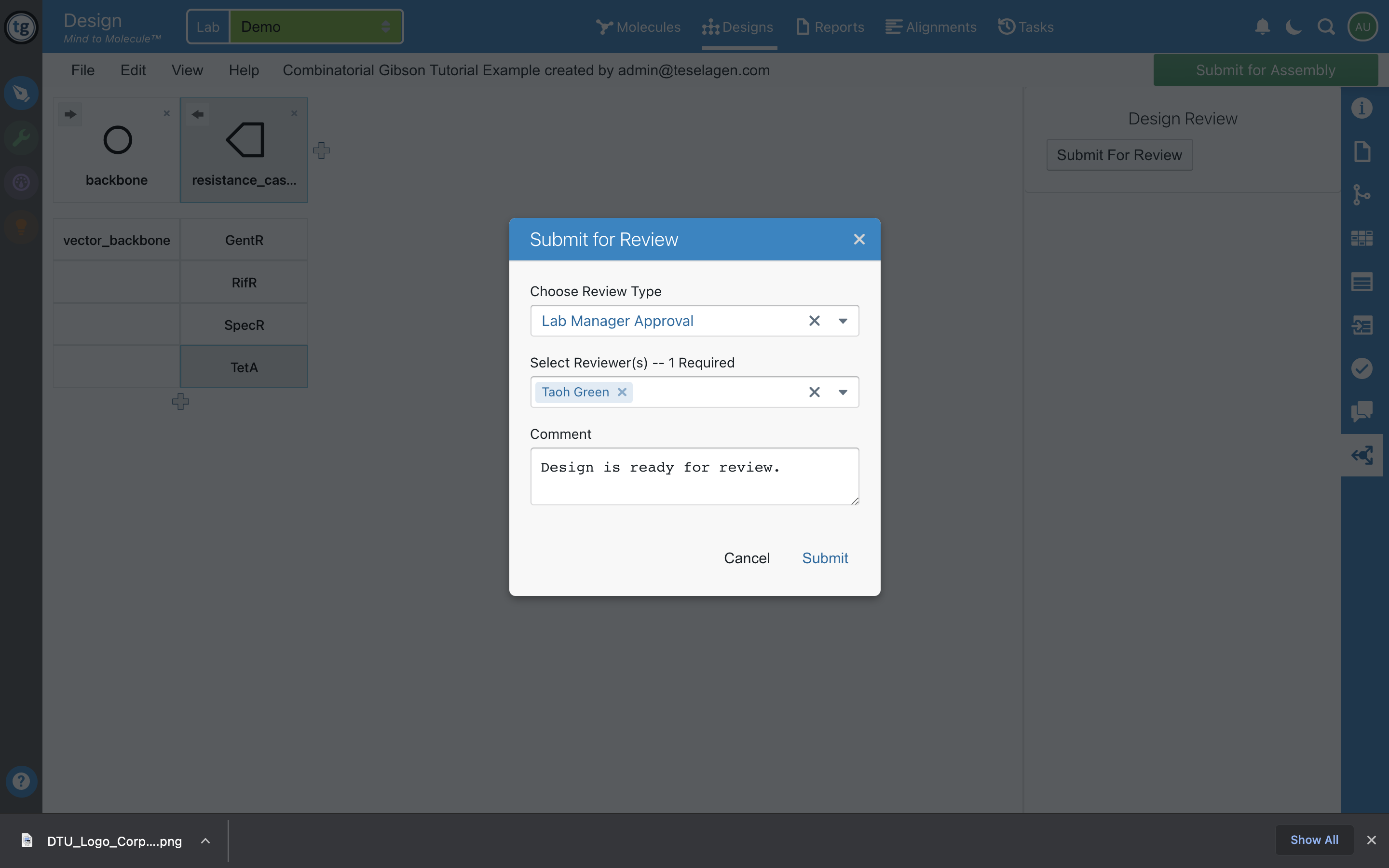 Whew! That was perhaps a bit more that you wanted to know right now, but those menus will become very important as you dig deeper into the Design Editor and the various assembly methods it supports.

Can we push the green button now??

Yes. Yes, you may. Finally. You will see a little message pop up as you do so... the design has been sent off to a server in the cloud to do some magic. When it is done a little notification message will be indicated, and can be read by clicking the notification system icon. When the assembly run is finished, the "Assembly Reports" menu item will now contain a list of assembly reports. In this case only one since it is the first time we have run the assembler against this design. 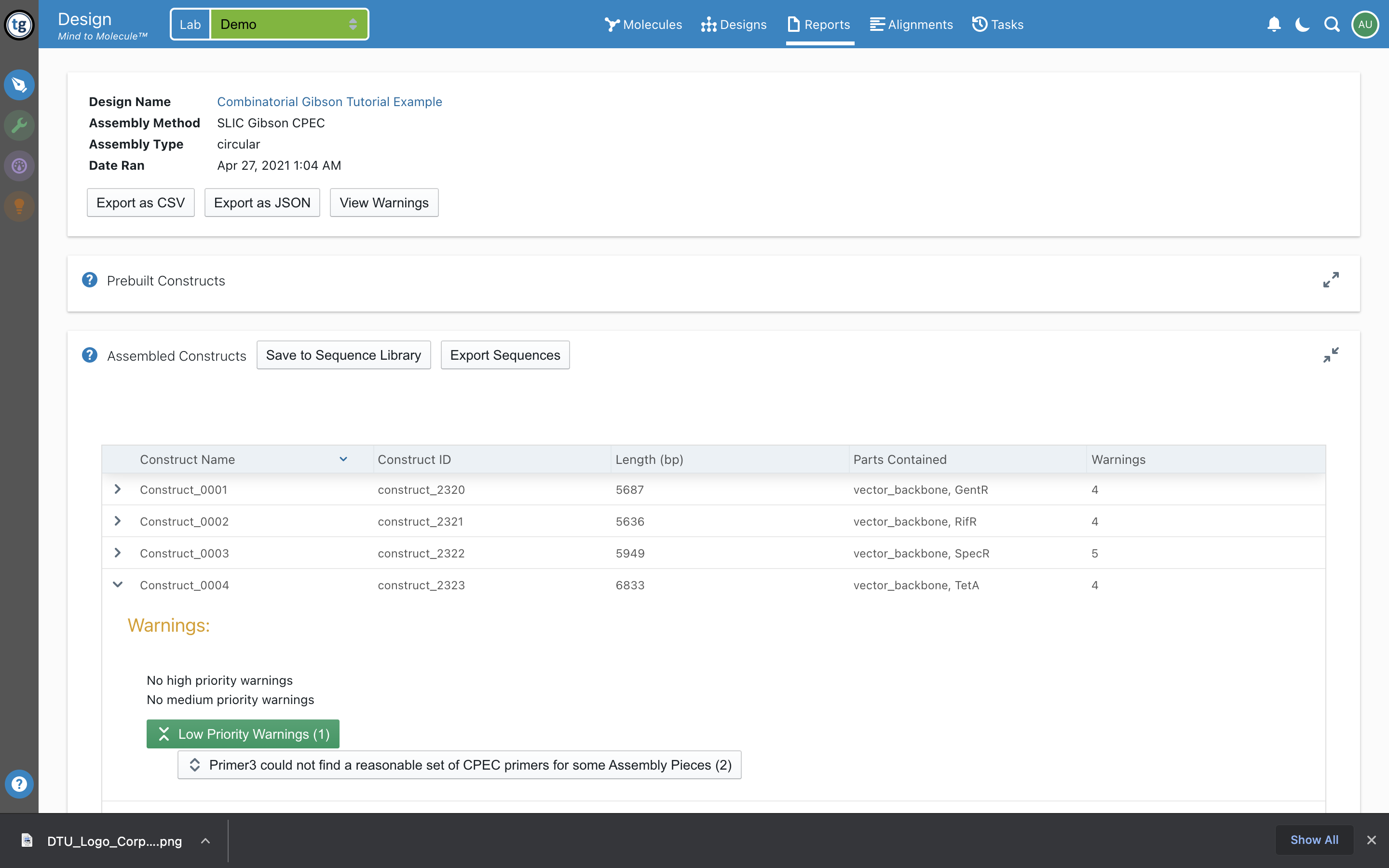 Click on any of the constructs to see the vector map showing how the final construct will look. Notice that annotation is preserved. 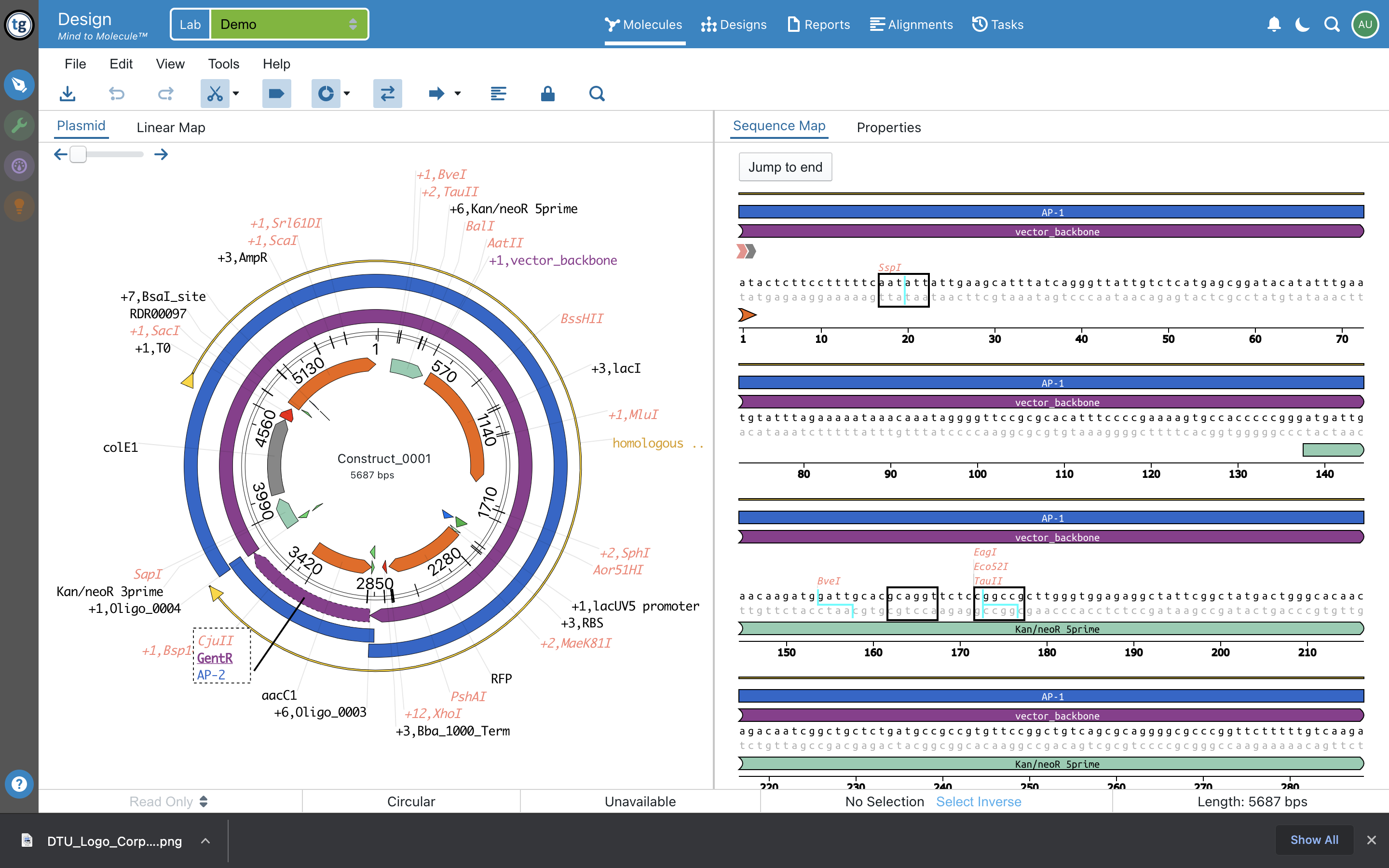 One of the interesting things to note is that the assembler has been clever about the design of the PCR primers needed to pull the parts out of their current background DNA while adding the needed flanking homology sequences for Gibson cloning without introducing any scar sequences. One might expect a design like this to require 10 oligo primers... yet only 9 are listed. Can you deduce how the assembler has reduced the number of required primers from 10 to 9? 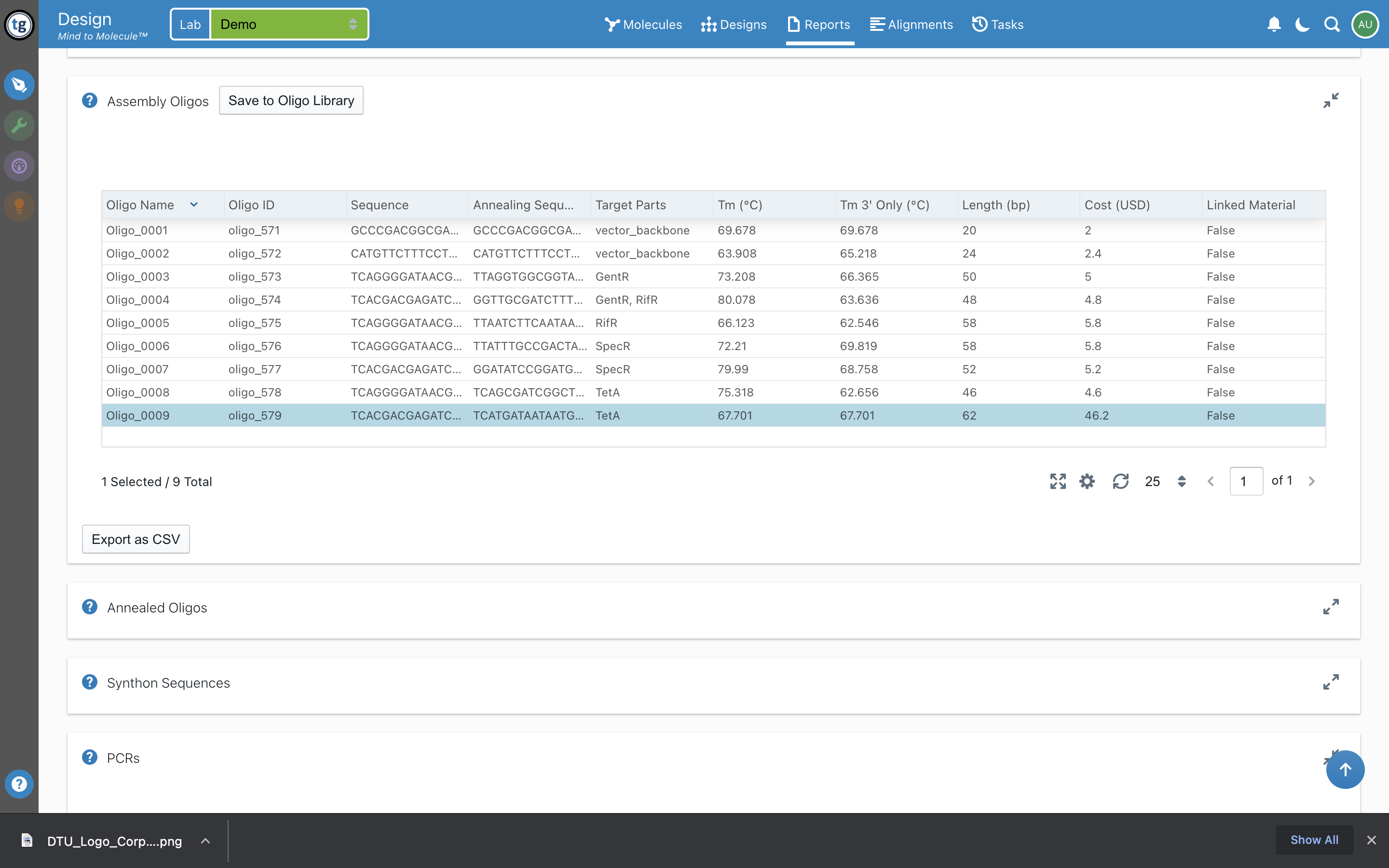