Making sense of the assembly reports

In the last tutorial we sent our library off to the assembler... what happens next? 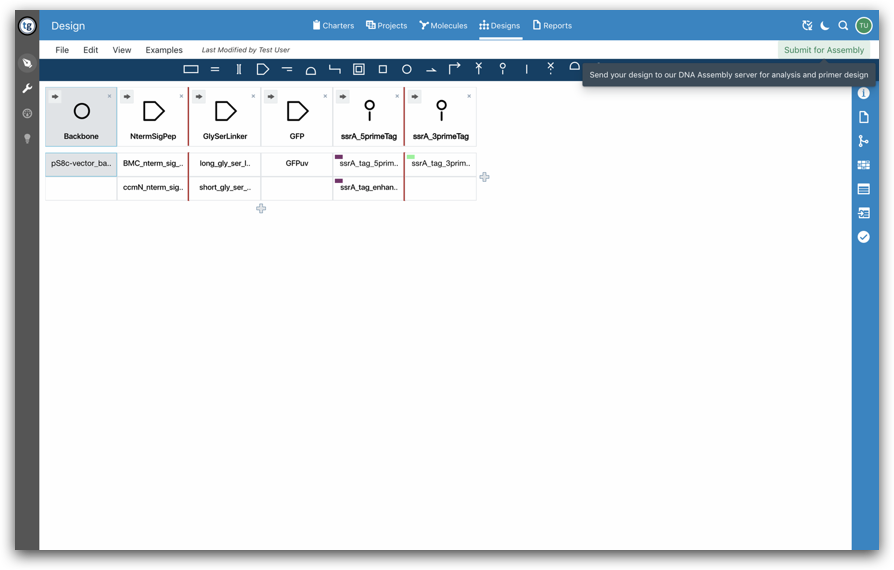 TeselaGen is different in that we don't require you to figure out how to build a library in the traditional artisanal fashion. Once you get your design into the Design Editor, the DNA Assembler takes over and generates all the information you need to build your library. You can think of the DNA Assembler as something like a magic cookbook. For example, you might have a recipe for lasagna for 8 people. Now however, you need to do lasagna for a big party of 200 people, 15% of whom are vegetarian, 5% of whom may be gluten intolerant, and oh yeah, you need to feed them as cost effectively as possible and all your cooks are robots! Wouldn't it be great if our recipe could magically adjust and generate all the required cost-optimal instructions for our robot cook army? This is what the DNA Assembler does, albeit for making DNA libraries and not lasagna.

While the DNA Assembler is working a task monitor will appear at top right of the interface. 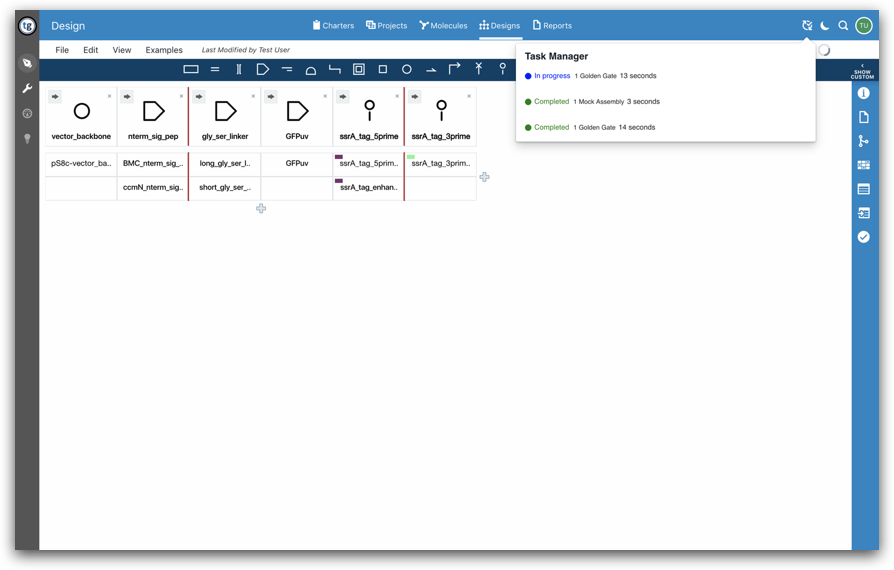 After the DNA Assembler finishes the job, you can view the results by clicking on the Assembly Reports icon on the right panel and navigating to the report of interest. 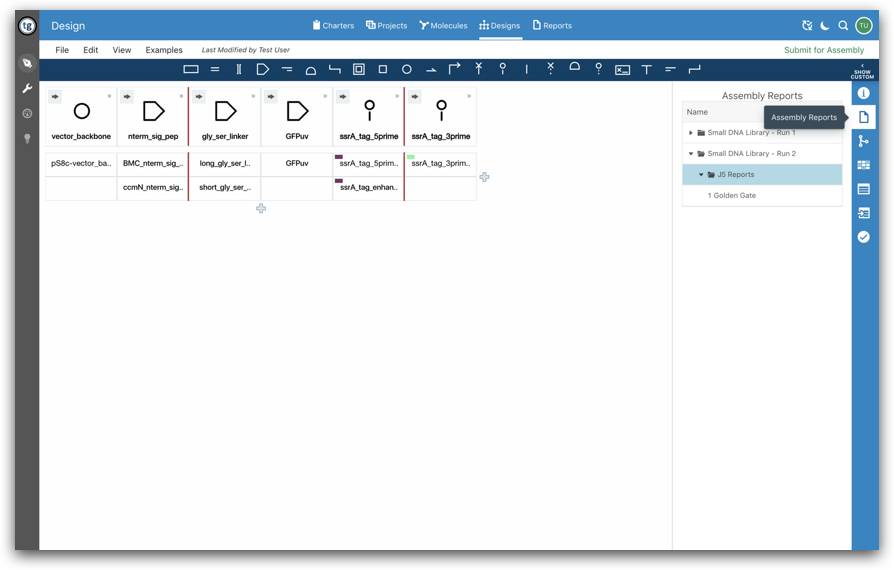 Alternatively, you can click on the Reports button to view all the assembly reports that have been generated by the assembler and select the report of interest. 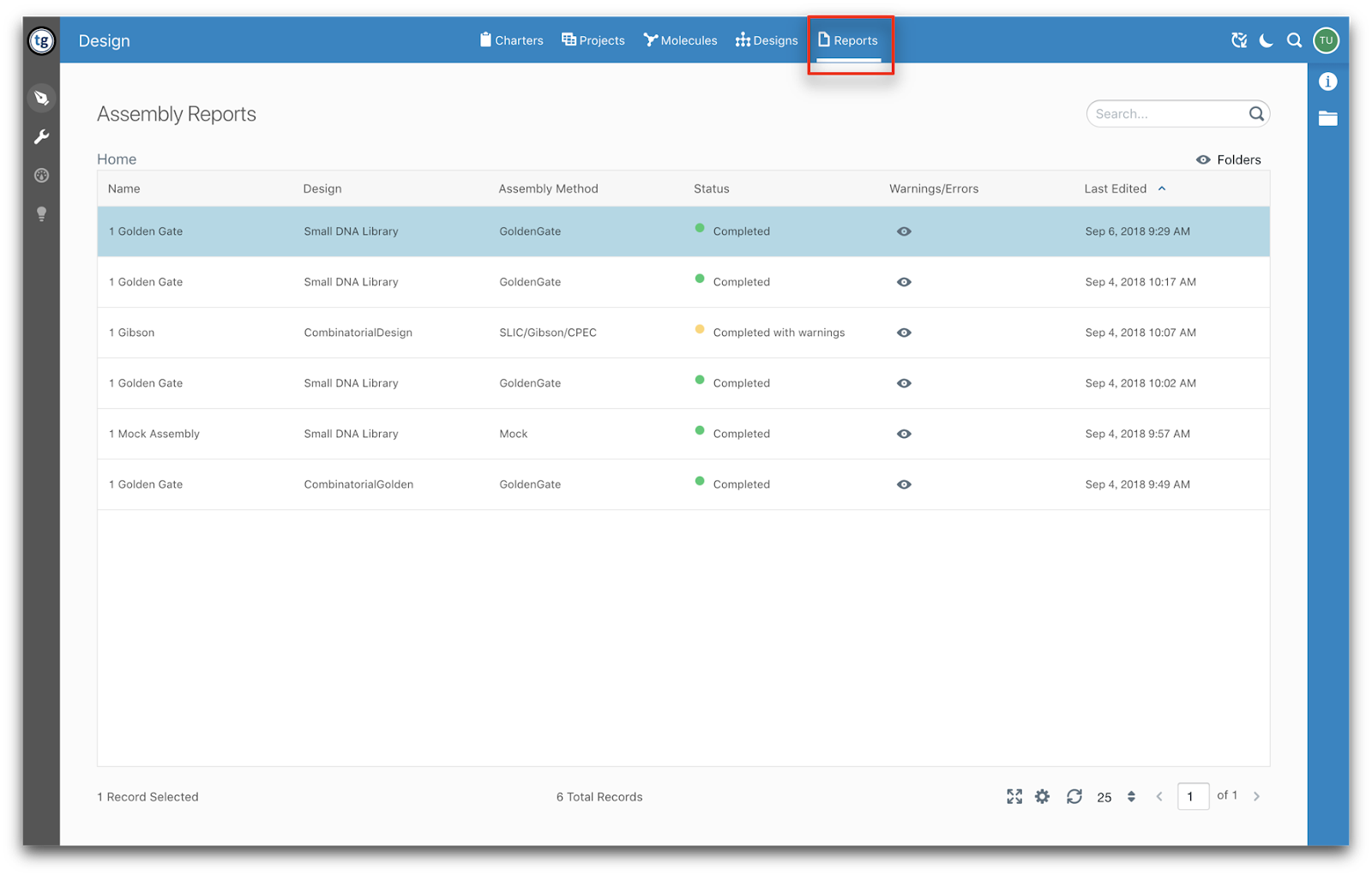 If you take a look at the entire output report it looks pretty detailed. The report starts with information about your design, the assembly method, the time it was run, the export format options, and whether any warning or errors were encountered during the assembly. 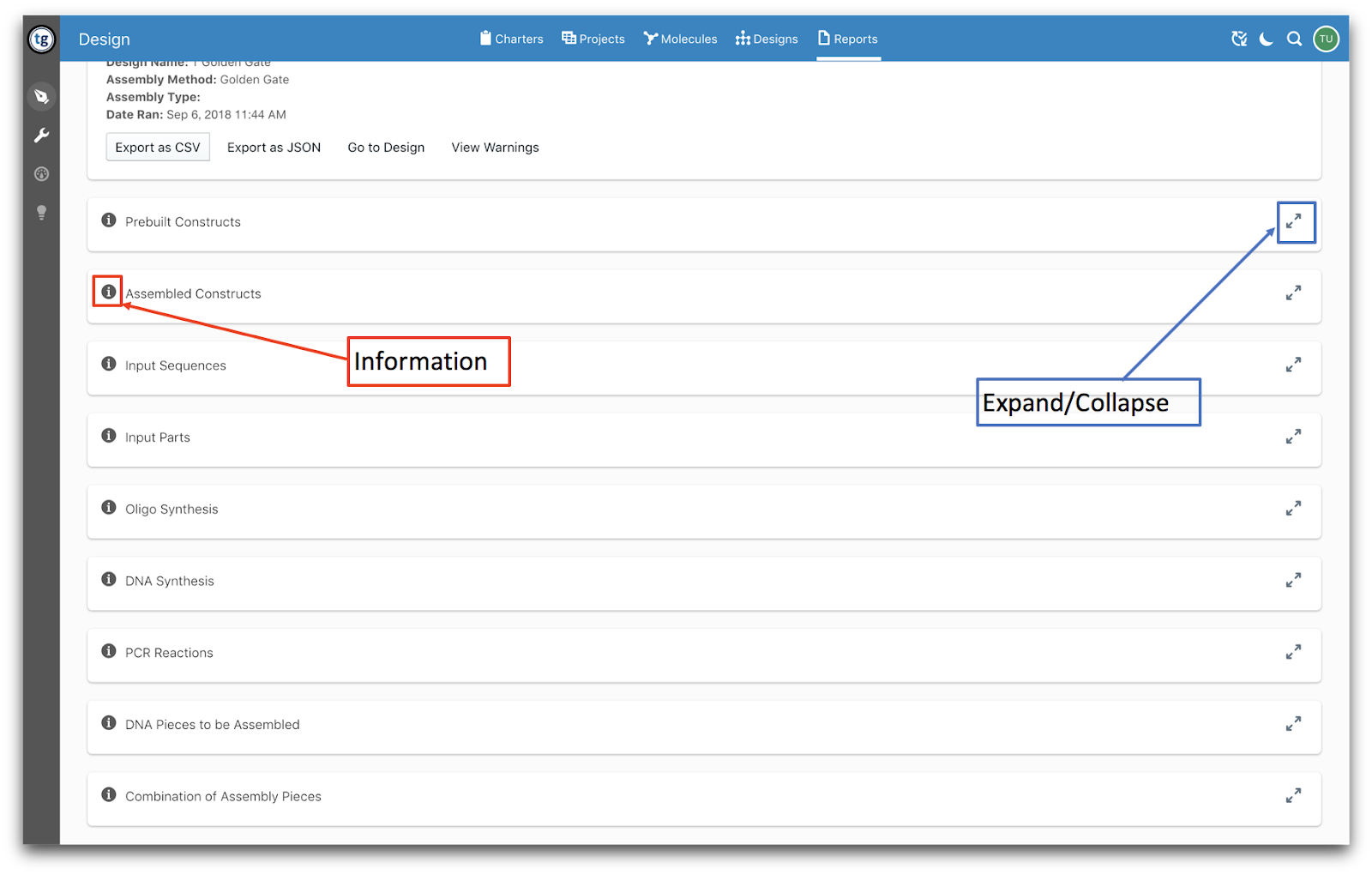 Following this descriptive data, the report is sectioned as follows: prebuilt constructs, assembled constructs, input sequences, input parts, oligo synthesis, DNA synthesis, PCR reactions, DNA pieces to be assembled, combination of assembled pieces. You can view the content of each section by expanding its window. By default, the window is collapsed if there are no content to display. The sections in the figure above were manually collapsed so that they all can fit in a screen. You can view the definition of each section by hovering the cursor over the information icon. Let’s look at each section in more detail.

As the name suggested, input sequences are the source sequences of the parts in your assembled constructs. They are present in the “DNA Sequences” library.

The input parts are the segments of input sequences used in the assembly. They are not necessarily the fragments to be assembled together. This is because the DNA Assembler is smart enough to know not to break up contiguous parts, but to leave them intact to minimize the number of assembly fragments and maximize re-use.

The section tells you what you need to go out and order from your favorite synthesis provider. You have the options to either save it to the oligos library or export as a CSV file. You should be able to view the sequence of each oligo from the Oligos library.  TeselaGen will be providing direct links to these providers to make ordering easy (this feature is currently available only in our Build module).

This section lists the DNA pieces that need to be directly synthesized with similar properties as the oligos. In our example, there is no direct synthesis and hence, no contents to be displayed.

This section lists the PCR reactions that need to be done to generate the assembly pieces.

8. DNA Pieces to be Assembled

This section lists the fragments to be put together in the final assembly reactions to give the desired constructs. The parts of each fragment can be viewed from the last section - Combination of Assembly Pieces

This section lists what goes where to make up the final DNA library. In a lab setting, this list gets translated into a worklist for the robots by the TeselaGen BUILD module. Must keep the robots happy.